America is dying and it needs a DOCTOR to save it! A REAL doctor, not a president who wants government to take over healthcare! Not only that, but America needs a president who understands Austrian economics and sound money; a president who is ready to take on the Federal Reserve system and rein in their dangerous and destructive policies. Thomas Jefferson and Andrew Jackson ended the First and Second Banks of the United States - Show America you want Ron Paul to end the Third! Donate $20.12 (or whatever you can afford) to Ron Paul’s LibertyPAC.

America needs a fiscally-responsible president who is ready to tackle the debt crisis and runaway government spending by cutting wasteful programs, irresponsible policies (like the War on Drugs) and reforming our foreign policy by ending the unsustainable wars we are involved in as well as bringing our troops home from over 700 bases around the world and shutting most (if not all) of those bases down instead of using them to police over 130 countries.

Let’s show Ron Paul that we want him not only to speak for US on stage during the 2012 presidential debates, but also to make the banksters shudder at their desks with a credible, well-funded and decisive run for the presidency! 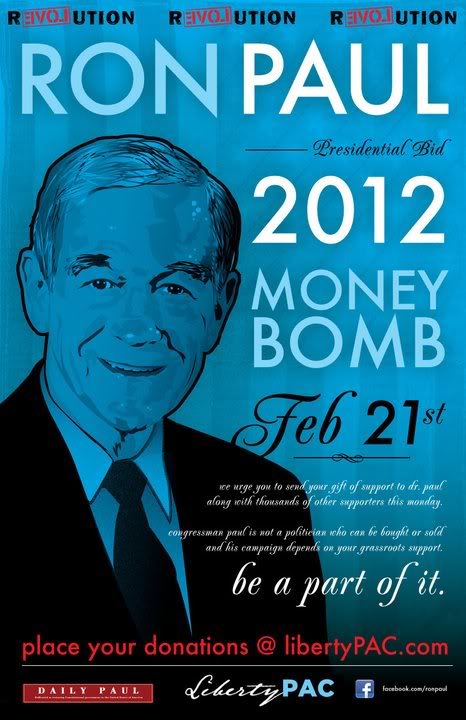 George Washington was a freedom fighter, a leader, and one of our greatest Presidents. But, much of General Washington’s greatness was marked not by what he did, but by what he chose not to do.

He could have been a King.

Instead, he stood for Liberty and stepped aside after eight years, allowing our young Republic to grow into the greatest nation in Human history.

2012 offers our movement a tremendous opportunity. Our nation is beset with crippling debt, an out of control federal government, and a foreign policy that weakens our national defense and isolates us from the world.

But with hard work and determination, we can change course and turn our country back toward Liberty and all of its rewards.

Quite frankly, we need to elect a President in 2012 who will do a lot less: less meddling in the economy, less spending, less warrantless ransacking, less bailing out of Wall Street, less inflating, and less foreign aid and overseas intervention.

We need a President who will respect our Constitution, not someone who simply pays lip service to our traditions.

Because I want a President who does so much less, a lot of people ask me if this means I want a weak President.

My answer is “No!” I want a strong President - a President like George Washington.

I want a President strong enough NOT to take power he should not have.

It is no secret that I am weighing my personal political options for 2012, and that I am relying on Liberty PAC to fund my efforts while I make important decisions.

Monday, February 21st, is Presidents’ Day, which celebrates George Washington’s birthday, and we hope to make it one to remember.

On Monday, Liberty PAC will host its first-ever Money Bomb. Please mark it on your calendar and consider contributing. If we all come together and pitch in, we can take our country back from the statists that are stealing our Liberty and shredding our Constitution.

The next few months will be critical to ensuring a successful political operation for the 2012 cycle. I hope you will join me by making this Presidents’ Day, February 21st, truly special.